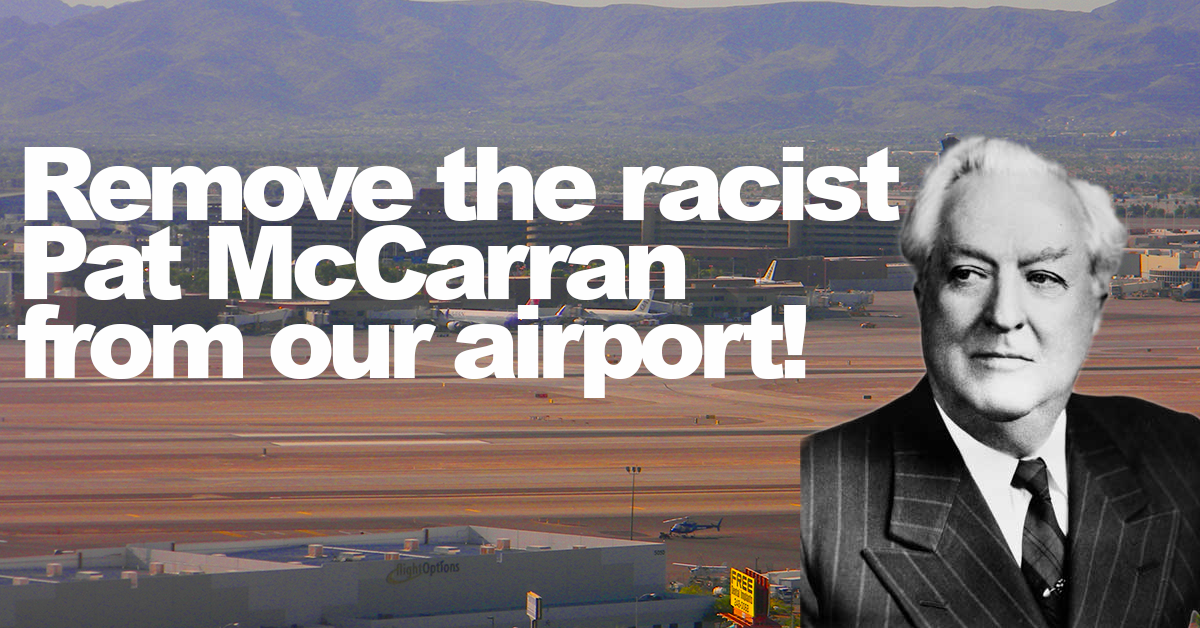 First and foremost, the time has come to take McCarran off the name of our  airport.  Former Senator Pat McCarran leaves a dark cloud of racism and anti Semitism that have no place in our state, especially at the welcoming point for millions of international visitors from every walk of life.

We believe that the best name for our airport belongs to someone who has left a true legacy of fighting for Nevada.  Senator Harry Reid has a long list of accomplishments, including being instrumental in shaping the Las Vegas Valley into a world class destination.

Senator Reid secured billions of dollars in direct appropriations to aid in the expansion and modernization on McCarran International Airport.  During the great recession, Senator Reid led the effort to obtain 2.4 billion in funding necessary to develop a new Terminal 3 at McCarran Airport.  This expansion was necessary to meet the demand of international travelers to Las Vegas.

Most importantly, Senator Reid has been a devoted son of Nevada and raised his family to be the same.

As a native Nevadan who grew up in the hard scrabble mining town of Searchlight, Senator Reid has seen Clark County grow from a small western “just passing through” area to a thriving community that is one of the fastest growing places in the country. It is a diverse area home to millions of people who have come here to lay roots, to enjoy the beauty of our public lands, and to take advantage of the opportunities Clark County has to offer.  Families and businesses alike are working together to create a better place to live and work. We are seeing record investments in education, including a world class law school, an emerging medical and technology hub, and cultural centers that bring arts and community together like the Smith Center. An economy that works for all.  This environment would not exist were it not for the decades of service from Senator Reid, who never forgot where he came from.

Senator Reid’s long time motto since his youth, has been the Franklin D. Roosevelt quote of “We can. We will. We must.”  This quote is emblematic of Clark County as well.  We have never given up moving forward even when the cards have been stacked against us, with the worst recession in our nation’s history hitting this community harder than anywhere in the country.  We grew stronger. Senator Reid has been there on the front lines fighting for Clark County and we can think of no better way to honor his work than to rename one of the busiest airports in the world after him.  He doesn’t just deserve this recognition; he has earned it with over 40 years in public service to battle born state.

No one has been more responsible on keeping nuclear waste out of Yucca Mountain.

Senator Reid is responsible for protecting hundreds of millions of acres of public lands in Clark County, including Red Rock Canyon and Mt. Charleston.  Two national monuments, Gold Butte National Monument and Tule Springs National Monument, were due to his work to bring key stakeholders together.  The result is a growing outdoor recreation economy where over 87,000 jobs are supported and $12.6 billion is generated into our state.

He passed the Travel Promotion Act of 2009 that included millions of dollars to brand Las Vegas to international markets.

Senator Reid has led the way on clean energy, ensuring the American Recovery and Reinvestment Act of 2009 directed funds to Nevada’s renewable energy industry.  He understands that clean energy is imperative for our climate and our health, while also creating thousands of good paying jobs for Nevadans that can’t be exported.

He led the effort to cut costs on health care, shepherding the Affordable Care Act through Congress.